We helped with a new responsive site, CMS and Opta match feed integration.

Bath Rugby is one of Europe's most prestigious rugby clubs. In 2015, as their 150th season approached the Club was looking to redevelop an aging website.

The Club's marketing director had worked with us previously, and asked us to be part of the pitch process. Initially we declined due existing commitements, but when the they came back a couple of months later we were able to invest the time to really help.

Before we got involved, they had separate mobile and desktop sites, so we brought them together in a single, scalable responsive site.  In addition, we coded up complex integrations and systems to pull live match data, fixtures and player details directly from Opta, the system that aggregates rugby information across the UK. 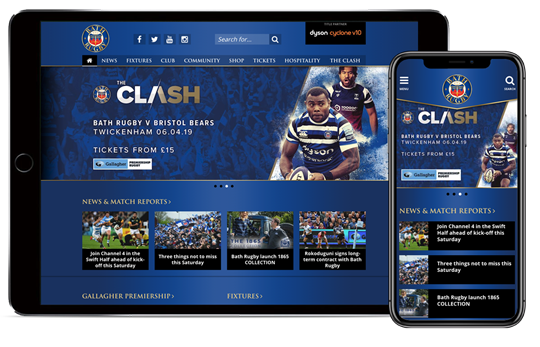 As always we wanted to get under the skin of the client. We dug deep into their history, brand and aspirations. We learned about their processes and how they affected their business. We talked to supporters at the ground, and thought about the flow of "onboarding" new ones.

The initial development was also supported by consultancy on an ongoing basis.

The Growth Agency for Attractions